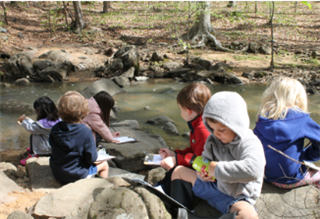 The Forest Project began after our many walks through Duke Forest and playing under the UTOT (under the oak tree). The student’s creativity and imagination soared as they played among the forest. Working collaboratively, they built campfires with sticks and leaves and gathered leaves to jump into. As they explored they began to ask questions, such as:
What kind of ants are these?
What lives in that tree?
Are there animals that live in the hole in the tree?
Where does the stream go to?
Why do some trees have leaves and some do not?
What animals live in the forest?
During walks in the forest, the students collected several objects to investigate further in the classroom. Some of these objects included a variety of dried leaves, rocks, sticks, and pinecones. These objects were brought back into the classroom to study further with the magnifying glasses. They made compared similarities and differences of the objects and did observational drawings of the objects.
As part of project work, students used a variety of media to represent their knowledge of the forest. After completing their representations, they shared stories with their classmates.


On one of our walks in the forest the students asked, “How did those houses get there? We met with the 5th graders who built the structures and they shared how they used a variety of fallen limbs, branches, and pine straw from the forest floor to build each structure.
Our students were curious and wanted to investigate footprints found in the dirt in the forest. Students used identification charts to identify various animals footprints indigenous to the forest. Plaster of Paris was used to create molds of the footprints to take back to study further in the classroom. After studying the prints more closely, they were able to distinguish the difference between dog and coyote footprints!
Students learned about various forest creatures from the Museum of Life and Science. During this visit, they learned about forest animals that are indigenous and non-indigenous to our region. In additional to learning an array of interesting facts, they got to interact with each creature by touching a rabbit, box turtle, an albino corn snake, and a salamander.
We ventured through Duke Forest with Andrew Brown, one of our parents who is working on his doctorate to be an environmental specialist from Duke University. On this field experience we learned that the Loblolly Pine is the most predominant tree in Duke Forest. He answered many of the children’s questions such as:
Our off-site field experience was to the Eno River, where we met with Naturalist, Chris Keffer. Our students learned many interesting facts about the forest, such as trees that grow alongside the river and how lichen gives us oxygen in addition to trees. The students got the opportunity to observe a salamander, water turtle, and a copperhead in their natural habitat!
Students were especially interested in snakes during this project, especially copperheads. Luke Orstad, a middle school student and sibling, came in to share knowledge and research on copperheads and snakes. Roger Orstad, a parent in our classroom, came in to share his experience when he was bitten by a copperhead in his backyard!
PHASE 3
Concluding the Project


To conclude the project, we invited families for a forest celebration. The children planned activities and shared their representative work about the forest. We concluded our culmination with a walk through Duke Forest for children to share their knowledge on a variety of trees, plants, and familiar sounds they learned throughout this project.
Developed by Renee Smith and Kerry Holbrook at Duke School
Kathy Bartelmay, Curriculum Director
© 2013 Duke School
1 / 33
3716 Erwin Road, Durham, NC 27705
Ph:(919) 493-1827 • Fax: (919) 419-1185